Skip to content
Free Domestic U.S. Shipping on all Flairs and orders over $151

Espresso 101: Learn the Basics of Espresso

What is Espresso?
Espresso is a method of brewing coffee, otherwise known as an extraction method. It is not a specific coffee bean or roast type! The major difference between espresso and other coffee brewing methods is pressure. To brew espresso, hot water is forced through a bed of finely ground coffee at high pressure, typically between 6 and 9 BAR. The contact between the coffee and the water at pressure results in a higher level of extraction, meaning that the natural oils and gasses in the coffee grounds are drawn out. The result is a stronger, more robust, but smaller coffee beverage with a layer of natural foam on top, called crema.
​​
While espresso is higher in caffeine, per ounce, than regular brewed coffee, one or two shots of espresso normally will have less caffeine overall than an 8oz cup of brewed coffee. 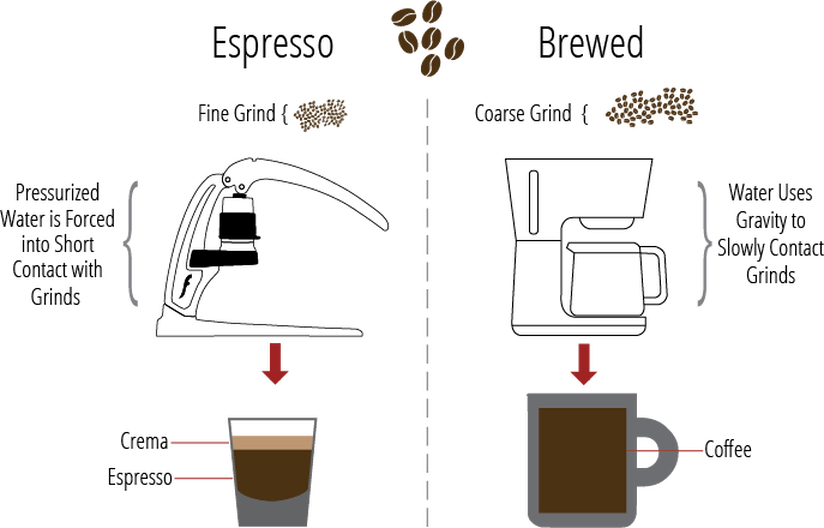 What is Crema?
Crema is the thick layer of foam that gathers on the top of a correctly brewed shot of espresso. This foam is the result of carbon dioxide in your grounds that is off-gassed and initially dissolved into solution as the pressurized water passes over the freshly ground coffee. Then as the liquid returns to atmospheric pressure, that carbon dioxide comes out of solution forming bubbles that become wrapped with a liquid film composed primarily of emulsified oils and small bean fragments, or fines.

Crema blooms in your cup in what is known as the Guinness effect, as can be seen in the image below. While all espresso should have some crema in the cup, the amount of crema from a correctly brewed shot can differ based on roast levels and bean type. In general, Arabica beans typically feature less crema than Robusta beans, and lightly roasted coffees will typically have less crema than medium or dark roasts. Additionally, the color of the foam will reflect the strength of the beverage, as it is ‘colored’ by the refraction of light through the foam.

Why is Crema Important?
At Flair, we use crema as a simple success indicator. While not the most important aspect of brewing, seeing crema bloom in your cup means that you have succeeded in combining the baseline inputs needed for extraction. Not getting crema means that you may need to adjust one of the major inputs to brewing espresso with Flair: your coffee beans, your grinder, resistance in your coffee bed, and water temperature, as seen below.